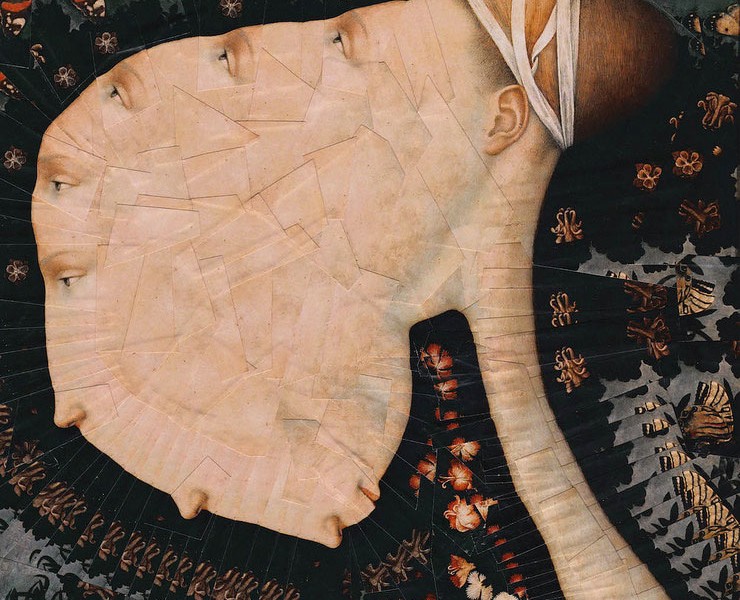 Self-taught Romanian collage artists Silviu and Irina Székley consider their works to be “conceptual spontaneities” that distort familiar images into new, transfigured realities. The duo takes traditional images, especially 19th century masterpieces and shatters our expectations through unorthodox manipulation. As the artists say themselves, “Our approach to art is very naïve, ludic and hazardous.”

In their related series “Manipulations” and “Circollage,” classical images are cut up and re-assembled- whether systemically, as in “Circollage” or through blasted reiteration, as in “Manipulations,” the pair communicates an eccentric mood. “What inspires us is the movement of unknown images, which blur the objects we think we know.” Along this vein, their works often appear eerie and unnatural- recognizable figures are de-familiarized through their often abrasive neo-Dadaist lens.

Deeply affected by their strong backgrounds in critical theory and philosophy, the Székleys say, “Each individual existence is a distortion in itself, an alteration of the original shape of the building blocks of life. From this point of view, we are fundamentally behaving like a moving image… ultimately we are a mere optical illusion experienced by another moving image.” In other words, they are simply deconstructing our already distorted reality in their complex collages.

While one might be tempted to apply a meaning or an ideology to their collages because of this, the artists resist the notion of art as predetermined: “We do not attach any predetermined aims or meanings to our works. The work happens to emerge and develop into its own existence… We believe that art is not art if it doesn’t generate certain forms of misrepresentation, confusion, anger or sarcasm.”