‘Advertising Is Fueled By Prejudice’: An Hour With Hank Willis Thomas 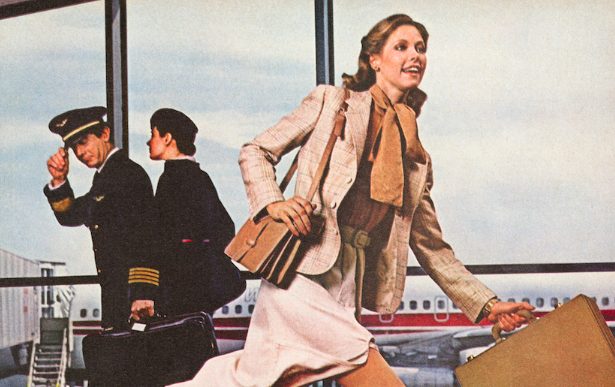 Hank Willis Thomas was in his studio near the Port Authority bus terminal in Midtown Manhattan showing me a ten-year-old advertisement featuring the rapper 50 Cent.

“We’ve become media-literate,” Thomas said. “We’ll consume an ad before we even look at it. Like this. Do you know what this is an ad for?”

One half of the image was devoted to 50 Cent staring carefully at the camera, wearing a camouflage cap tilted sideways and an impressively sized stud in his ear, the other half to a sheet of inky fingerprints from a police report. Across the spread was the tag “I Am What I Am.” In the corner was what looked a little like a lopsided “X” and three letters: “RBK.”

“Yes,” Thomas said. “Even you have been pierced! So you can see three letters and a symbol and automatically you know.”

Talking to Thomas, who is 39 but looks maybe ten years younger, was like being the only attendee at a lecture by an enthusiastic media studies professor. For an artist under the age of 40, he has already produced an incredible body of work ranging from conceptual sculpture to public performance. He is, however, predominantly known as a photographer. Thomas told me his biggest artistic influence is his mother, Deborah Willis, an artist and art historian who is the author of such books as Reflections in Black: A History of Black Photographers 1840 to the Present and the chair of the photography department at New York University, Thomas’s alma mater. He took obvious pleasure in presenting to me a portfolio of ads that he began compiling in 2005, which became the basis of a series of works called “Unbranded: Reflections in Black by Corporate America 1968-2008,” the title something of an ode to his mother. In his studio, he was quizzing the class, such as it was.

“And so in this shoe campaign,” Thomas said, “for an apparel company, you have this musician, an entrepreneur maybe, and”—he pointed to the fingerprints—“he’s still a criminal at the end of the day. I saw this on the street and there was a kind of ethnically mixed group of teenagers nearby, but maybe three or four African American boys. And I was wondering how images like this affect how they understand and relate to one another. When you see images of, like, what the black guys are like in public, do you then have to perform that? And also how do the other friends who don’t identify as African American men relate to their friends?”

He flipped through the portfolio, and continued showing me the Reebok campaign. There was Andy Roddick, meekly covering his face, juxtaposed with a silver trophy. And Lucy Liu, pictured next to an image of her as a little girl, laughing as she goes down a slide. Yao Ming appeared alongside an illustration of a monkey on a basketball illuminated by rays of light. Allen Iverson was represented by a picture of the devil. And Jay Z, lounging in a Manhattan penthouse, was parallel to an ominous brick building and a quotation: “I got my MBA from Marcy Projects.”

“So it was like, OK,” Thomas said. “African American men are five percent of the population and are represented three times in this ad. Women are half the population and they are represented once, and it’s this stereotype of Asian women as docile, innocent things. And the one white guy is a champion, even though he feels bad about it. And then you have the Chinese giant, and they clearly don’t know what to do with him. We have got a monkey on a basketball with a yin-yang symbol and the rising sun in the background even though that’s Japan. Let’s just throw it all in there. And then, yeah, the other black guy’s a devil and the other one’s a drug dealer. And this is to sell shoes! And there are no shoes!”

Thomas’s work over the last decade has provided a working appraisal of representations of race and gender in both advertising and the real world. He is a skilled photographer, but I think he’s at his best as a critic of the medium, creating images that lampoon the very language of corporate America, or in Thomas’s words, “to use the symbolism of advertising to talk about things advertising can never responsibly talk about.” For instance, Priceless, from 2004, a photograph of a black family grieving at a funeral service transposed with ad copy modeled after a MasterCard commercial—“9 mm Pistol: $80”; “Picking the perfect casket for your son: priceless.”

Certain pieces dealing with professional sports might have served as a Nike campaign if not for scattered, disturbingly altered details, like two black men dramatically posed in action playing basketball, the hoop replaced by a noose. In other works, he simply takes an ad and removes the copy. In his studio, Thomas showed me an image that originally appeared in Ebony magazine in 2005. He had deleted the text and what was left behind was half of a watermelon, with a small scooper sitting next to it. He asked me what I thought it was an ad for. I looked at it for a while and said, perhaps hopefully, “Well, the scooper makes me think it’s some kind of ice cream maybe?”

“You’re looking at the right signifier,” Thomas said. “But it’s actually for kitty litter.” I registered a touch of horror in his voice.

“At some point down the line I was given this,” he told me, pointing to a page in his portfolio. It was a close-up photograph of a black man’s mouth in the midst of a toothy grin, with a small, gold SUV adorning one of his incisors. “Someone said to me, ‘You should do something with this,’” Thomas continued. “I didn’t know what to do with it. It’s an ad for a 2001 Toyota Rav4. And after four years of looking at it, all I could think of to do with it was this.”

He turned a page, and there was a picture of the same mouth, with the gold SUV removed.

Thomas’s new series is called “Unbranded: A Century of White Women 1915-2015.” and goes on view this week in New York at Jack Shainman Gallery. For the project, he scoured ads from the last hundred years featuring white women as their main subject. One for Drummond sweaters from 1959 has copy that actually says, “Men are better than women!” He had in mind the upcoming election, with the country on the verge of very possibly having a female presidential candidate.

“No one’s identity can be summed up by two things like skin color and gender,” Thomas said. “But what happens when you do advertising or marketing, you have to do just that: age, gender, skin color, and/or geographical location. Basically what advertising is fueled by is prejudice.”

He produced another portfolio and walked me through a century’s worth of ads, one for each year between 1915 and 2015. He placed the original ad side by side with his altered work, in which he had removed any information that might let on that the images existed to sell a product. For the year after World War I, a woman is cradling a man in uniform, and exposing her long legs. (The ad was for hosiery: “It’s like, your husband is back from the war, he’s damaged, and you want to awake his virility and give him hope so you have to dress the part,” Thomas said.) In 1920, the first year American women could vote in a national election, a woman can be seen with a flapper haircut behind the wheel of a car.

Thomas read aloud the tag for a Maxwell House ad from the 1920s, where two butlers in blackface serve an immensely satisfied middle-aged white woman coffee. The line that would supposedly emphasize the pleasure of buying Maxwell House was: “GOLLY MIS’ MARIA. Folks jus’ can’t help havin’ a friendly feelin’ for dis heah coffee!” to which Thomas sighed and said, “Kind of amazing.”

He turned to an illustration depicting the antebellum South, with a young white couple dressed in ornate evening wear, while a black servant slices up pieces of ham and gently slides them onto their plates. “What would you guess this is for?” Thomas asked. There was a long pause. I couldn’t come up with anything.

“Exactly,” Thomas said, then displayed the original ad—text and all—from his portfolio. It was for Budweiser. Thomas rationalized this as best he could. “I guess someone told them that in the old days you’d have your servant—your slave—offer people ham,” he said. “And now you can offer somebody a Bud. That’s the only real logic that there possibly can be.”

One thread, then, in Thomas’s work is progress—Maxwell House wouldn’t get away with such blatant racism today. And a 1952 ad for lingerie—featuring a woman in a skirt and bra standing on a platform beneath the line “I dreamt I won the election…in my Maidenform bra!”—seems completely ridiculous in light of Thomas’s initial impetus for compiling this work. The ads increasingly tell a story of advancement—of second-wave feminism, of a growing black middle class, of the slow dissolve of the rigidity of gender roles. Thomas was genuinely moved when we came upon a Tylenol ad from a few years ago, featuring a happy lesbian couple taking a selfie in front of the Manhattan skyline.

But of course, another story Thomas tells is of stereotypes merely shifting, of racism and sexism simply becoming more understated, and only in some instances. 50 Cent is still criminal, in other words.

“We find images like this,” Thomas said. He was looking at a picture of a blonde woman, swinging from a vine through a jungle and wearing a ragged bikini. “Christie Brinkley,” he said, and then read the tagline: “The natives will get very restless.” The ad was for Coppertone’s “tropical blend” tanning oil, Thomas said, and because of that, “Of course you have to speak about the tropics, about the dark people, and of course they have to be savage. And you have to have the blonde with the bone necklace and cowry shells, swinging from a vine.” He chuckled slightly, then paused. The date on the image was 1976. “This is the year I was born,” he said.