Being Happy Is Simple 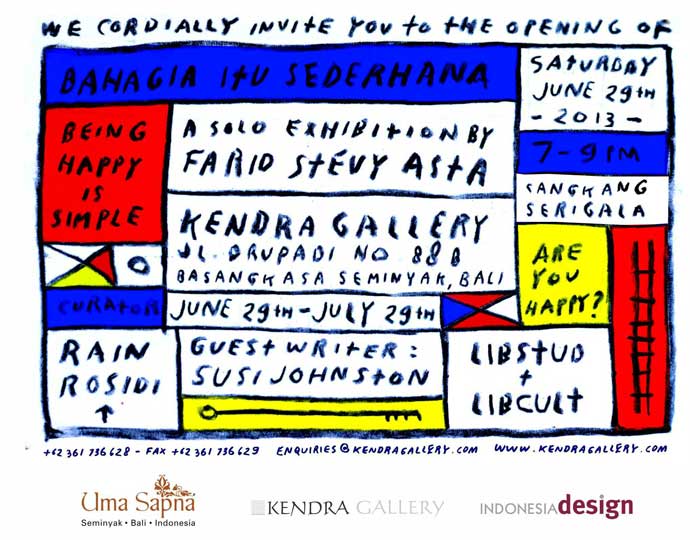 Farid Stevy Asta solo exhibition is entitled “Bahagia Itu Sederhana”/Being Happy is simple. The complicated situation, full of repression sometimes entails simple conclusion but giving freedom. That was at least in Farid Stevy Asta when he appears  hashtag #bahagiaitusederhana (being happy is simple) in the social media. Farid writes about  hashtag at twitter after passing certain moment in his social association and found a mantra that can give him freedom: “being happy is  simple”. The mantra that is given life through  modern communication technology moves fast and beyond various gaps, social layers, problems of life and at the same time  gives birth to  various  creative works.

In the process of preparing for this exhibition Farid hunted for words in between his other activities—playing in the band, designing graphics, and so on. He made some small booklets as a kind of log book, a tool for him to store words or sentences. Each word or sentence a person produces, whether it’s through social media or advertising or a greeting, has already gone through a process of editing in the mind of the message sender. Farid collects these blurbs and puts them into his little books. These leather-bound books get filled with graffiti that become the raw materials for his own writings. This system is similar to the one he uses to write song lyrics. In his studio, Farid executes the words and sentences spontaneously on canvas. Much like a train of thought in psychoanalysis, he writes a word and then writes another word next to it, whose connectedness is subconscious. When he paints, he recycles the words as elements of painting, by sprinkling some words with lines to form fields.

Farid tells us that this newly completed body of work represents a metamorphosis in his development. He uses the word “raw” with visceral glee. This work is messy. This work is dirty. The world we inhabit here in urban Indonesia is messy. And very dirty. Whatever is sleek or polished or precise becomes blemished instantly, if not sooner. Any newly-arising vision of an Ideal World tarnishes in the tropical and political funk here, even before it has been seen or described. Who knows that more than The Kids? Farid received the invitation to rawness from Philip Guston, via Basquiat, and he finally accepted. Coming from a background in media and graphic design, Farid’s jailbreak from the constraints of clean work, clear lines, and ease of unlimited cheap reproduction is a watershed in his development as an artist.