‘We Have Lost the Ability to Flush the Toilet’: Art-Festival Culture in Istanbul 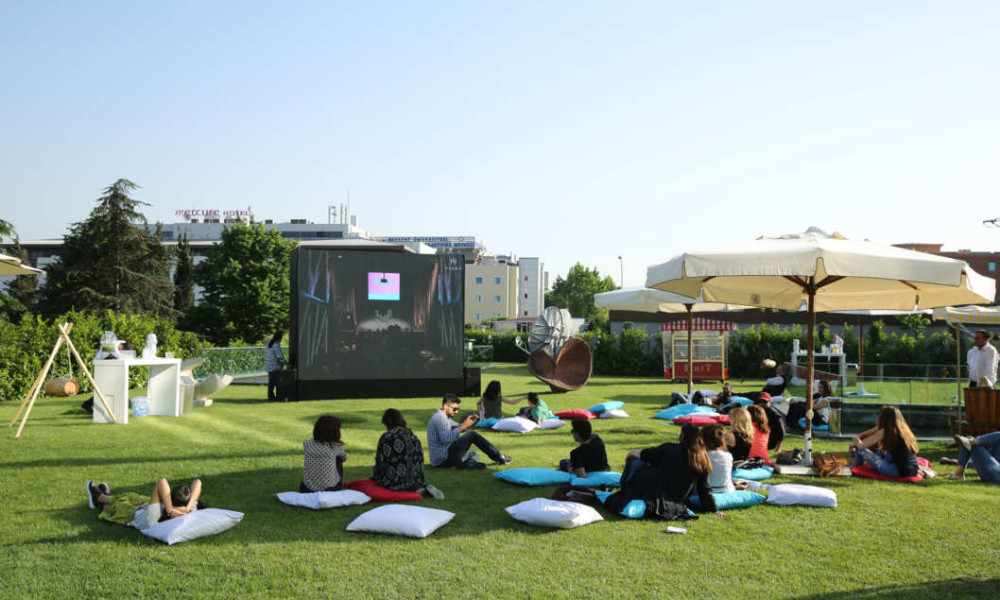 “If any art should have an effect on society, it should be uniting people, and that’s what we’re trying to do with the festival,”

As the elevating allure of fine art exerts a greater pull on the more utilitarian creative industries of fashion, music, design, architecture, and high-end real estate, we’re witnessing the emergence of a new format for its dissemination. Where biennials once segregated art and artists into self-contained didactic exhibitions like so many exotic white rhinos at the zoo, the new rash of arts festivals mingle practitioners of every field into sprawling series of lectures, performances, dinners, and de-facto bar crawls across neighborhoods all over the world that serve as their city’s East Berlin or East Williamsburg.

It’s a kind of plug-and-play culture. Dallas’s recent Soluna Festival, Michigan’s ArtPrize, Berlin’s Transmediale: The same names pop up in each city for impromptu throw-downs of cultural capital, the events distinguishing themselves mostly by the designs of their branded tote bags. This past weekend saw the trade winds of the trendy blow nomadic influencers to Istanbul for the annual IST. Festival, to celebrate the theme of “realism.” The results, in fact, were rather surreal.

At the juncture of Europe and Asia, Turkey is a fraught place for a cultural gathering of late. The festival took place just as news broke that ISIS overran the ancient city of Palmyra, a seat of Middle Eastern culture outside Turkey’s border with Iraq. Flights to the country are scrutinized heavily for would-be jihadis. The idea of open cultural exchange has rarely felt more necessary, and IST. embraced that purpose with an infectious enthusiasm that went well beyond the usual fanfare, even as it interrogated its own reason for being.

On a stage in the basement of the city’s shiny new Soho House — an especially post-colonial outpost of the London-based global lifestyle center, housed in a 19th-century marble mansion formerly home to the U.S. embassy — the British director and composer Mike Figgis gave a lecture entitled “Is There Too Much Culture?” Due in large part to technology and its attendant interconnection, we can’t get rid of the old, irrelevant artifacts of the past to make anything truly new, he argued. “There’s a demand for decadence in a decadent culture,” Figgis said. “We have lost the ability to flush the toilet.”

Sitting in the luxuriant dark, dashing to the marble Turkish coffee stand for refreshments, admiring the room’s circular chandeliers, and listening to Figgis’s exhortation, it was abundantly clear that whatever the problem with culture was, we were all probably part of it.

But in regards to this festival culture, how relevant was Figgis’s complaint, issuing as it did from a successful Hollywood filmmaker speaking on a stage in Turkey? Sure, the festival circuit has its superficialities. The events are ephemeral, the diversity elaborately orchestrated by jet engines at great expense (though rarely at the cost of the travelers). Yet the collisions, the unintentional meetings and communications of inspiration, are very real, indeed.

Instead of static exhibitions, IST. is constructed around a series of conversations, solo talks, and screenings over the course of the weekend. Things began at Vakko Fashion Center, a corporate headquarters in the hills around the European side of Istanbul. A young, local crowd lounged on pillows tossed around the lush lawn eating the local bagel-alternative simit, marshmallow-y Turkish ice cream, and green apples.

The ensuing presentations ranged from a TED-style talk by Trevor Paglen to a discussion of the difficulties of producing magazine fashion shoots in the age of Instagram. Hip-hop artist Fuat Ergin spoke, as did other Turkish figures like author Zülfü Livaneli, director Gürcan Keltek, and journalist Müjde Yazıcı, with live translation broadcast through headphones.

Everyone leapt to take advantage of the international art scene’s pit stop in Istanbul. The omnipresent actor and designer Waris Ahluwalia offered tea selections. Lehmann Maupin presented an exhibition by photographer Alex Prager, whose fashionably slick narrative conceptualism plays well in any context, at Istanbul ’74 gallery, a cultural engine founded by the same couple behind the festival itself, Alphan Eşeli and Demet Müftüoğlu-Eşeli.
Figgis added to the cultural pile in a performance collaboration with the multimedia musical outfit Carnet de Voyage. As Rosey Chan and Mimi Xu played and sang against a backdrop of ambient film clips, Figgis contributed mournful passages on the flügelhorn from his post at the mixing board. (“I learned it when I was 11,” he explained during the ensuing gala dinner in the courtyard of a centuries-old brewery, fashionably renovated by Efes, which produces what’s essentially the local version of PBR.) One hoped that the piece was a fabulously knowing critique of what Figgis called “so much garbage in the art world” and “crap in the lake” rather than an unintentional symptom.

In the front row, the actress Juliette Lewis — at IST. to explain a film collaboration with the painter and Snarkitecture architect Daniel Arsham, who wandered around dazed in cyberpunk eyeglasses — giggled loudly and shot a bunch of iPhone videos. Paglen missed the performance some time after wandering in the direction of the bar.

The cloistered conditions necessary for this kind of cultural transmission, however messy it looks, were previously limited to places like Rome, London, New York, or Paris. Festival culture is an argument that this scene belongs to the world, not just a select few at the Cedar Tavern at the right time in art history. (It’s worth noting the location of the New York School’s famous bar recently became a waxing salon.) That means competition outside of the usual suspects for spots on the circuit. One wonders if, sooner or later, the names on the schedule might not be invited back.

To cap off the 2015 festival, the two founders of IST. guided guests onto a yacht docked just outside a hotel that might as well have been magically airlifted out of a Wes Anderson film with a name to match, the Ciragan Palace Kempinski. After the push away from shore, Demet, who runs Istanbul ’74 as well as a creative agency and other endeavors, and Alphan, a filmmaker, sat together at a table facing the interior of the deck, watching the crowd with a certain exhausted satisfaction.

I asked Alphan about the profusion of festival culture, the biennials, the pop-ups. From his perspective, “All the festivals serve a purpose. Most of them are very successful,” he said. “But this is more personal. It’s more about the people than the work itself. More about sharing ideas and experiences, more about exchange.” The art world loves to make noise about exchange and transmission, but here, at the meeting of continents, it actually felt possible. “If any art should have an effect on society, it should be uniting people, and that’s what we’re trying to do with the festival,” Alphan continued.

“That makes it different from other festivals; you’re not doing a competition, you’re not charging anyone to listen,” Demet said. “It adds a lot to the young generation.”

The interdisciplinary nature of festival culture, the sprawling confusion — it’s an outgrowth of this fresh openness. There are real things at stake here. Rather than the end of culture, or just more on the pile, it seems to represent a new, largely hopeful frontier of global hybridity. “Every artist wants to explore different media,” Alphan said. “The boundaries are disappearing.”

While this ease of movement across cities and media (are they so different?) is clearly the province of the wealthy, or enabled by wealth of one form or another, events like IST. embrace an uncommon accessibility, forwarding the notion that global culture actually belongs to the globe. I don’t buy Figgis’s claims of “too much.” The festivals often take place in areas that have suffered a long-standing lack of access to global dialogue. Now, rather than going to it, they’re bringing public discourse home to their own communities.

As for the after-parties following the discussions, well, it remains true that you have to get on the right list.

An elaborate buffet of Turkish food was served on the rolling waves of the Bosphorus as the boat threaded its way between the city’s European and Asian shores, a small gap that has been stitched together with bridges that passed high overhead, far above the masts. When a nighttime rain shower began, the crew unfurled canvas canopies and they invited passengers to huddle closer together.