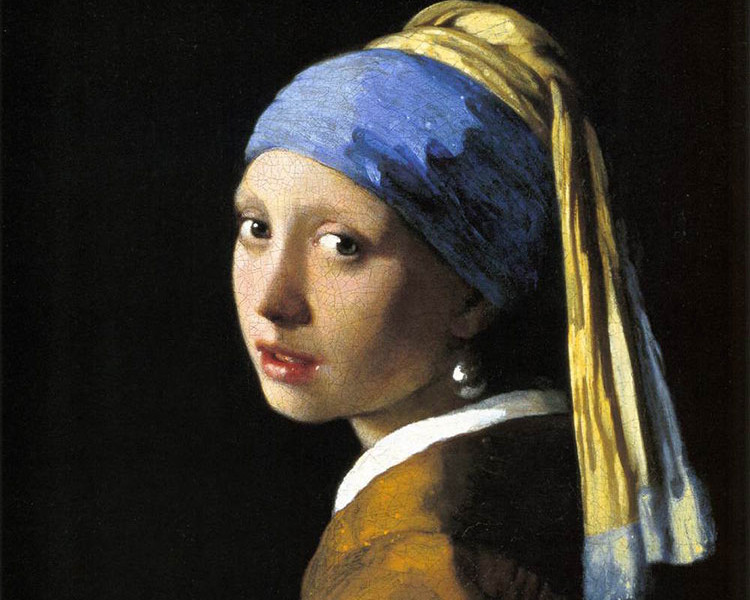 Michelangelo couldn’t afford ultramarine. His painting The Entombment, the story goes, was left unfinished as the result of his failure to procure the prized pigment. Rafael reserved ultramarine for his final coat, preferring for his base layers a common azurite; Vermeer was less parsimonious in his application and proceeded to mire his family in debt. Ultramarine: the quality of the shade is embodied in its name. This is the superlative blue, the end-all blue, the blue to which all other hues quietly aspire. The name means “beyond the sea”—a dreamy ode to its distant origins, as romantic as it is imprecise.

Derived from the lapis lazuli stone, the pigment was considered more precious than gold. For centuries, the lone source of ultramarine was an arid strip of mountains in northern Afghanistan. The process of extraction involved grinding the stone into a fine powder, infusing the deposits with melted wax, oils, and pine resin, and then kneading the product in a dilute lye solution. Because of its prohibitive costs, the color was traditionally restricted to the raiment of Christ or the Virgin Mary. European painters depended on wealthy patrons to underwrite their purchase. Less scrupulous craftsmen were known to swap ultramarine for smalt or indigo and pocket the difference; if they were caught, the swindle left their reputation in ruin. more

In 1824, the Societé d’Encouragement offered a reward of six thousand francs to anyone who could develop a synthetic alternative to ultramarine. Two men came forward within several weeks of one another: Jean-Baptiste Guimet, a French chemist, and Christian Gmelin, a German professor from the University of Tübingen. The prize was fiercely contested. Gmelin claimed he had arrived at a solution a year earlier but had waited to publish his results. Guimet countered by declaring that he had conceived his formula two years prior but—like Gmelin—had opted not to publicize his findings. The committee awarded the prize to Guimet, much to the displeasure of the German gentry, and the artificial blue became known as “french ultramarine.” As a recreational painter, I feel undeserving of the ministrations of ultramarine. The color, like a truffle in the kitchen, is not an appropriate ingredient for dabblers and dilettantes. A tube of synthetic ultramarine paint is no more costly than a cerulean or cobalt, yet it still cuts an imposing figure. To apply it crudely seems a slight against the past. Many artists far more gifted than myself would have gladly given their left ear for a single ounce of the pigment. I wonder what Titian or Veronese would make of the paintings of Clyfford Still or Yves Klein, with ultramarine applied by the canful. Their hearts might stop calculating the cost.

Synthetic ultramarine, due to its lack of mineral inclusions, boasts a richer tone than its semiprecious predecessor. Traditionalists like Andrew Wyeth insisted on grinding the original, at great personal expense, even with the artificial paint readily available. “A color may be too pure. Modern shades and colors often appear hideous, ironically, because of their extreme purity,” writes Alexander Theroux in his triptych of essays The Primary Colors. “Old-fashioned blue, which had a dash of yellow in it … now seems often incongruous against newer, staring, overly luminous eye-killing shades.” In our pursuit of perfection, of unspoiled coloration, we purged colors of their unique characters.

Even the finest natural ultramarine, ground assiduously by hand, is riddled with odd minerals: calcite, pyrite, augite, mica. These deposits cause the light to be refracted and transmitted in subtly different ways. No two strokes of paint are the same in their fundamental composition. Stand at the right angle and you might catch a quiet glimmer of white or gold, like a prick of light from some distant province of the cosmos. Blue remains a muse precisely because it is a mirage. “Among the ancient elements,” writes William Gass in his treatise On Being Blue, “blue occurs everywhere: in ice and water, in the flame as purely as in the flower, overheard and inside caves, covering fruit and oozing out of clay.” Yet we can’t handle or touch the blue of the flame any more than we can bottle the blue of the sky.

Kandinsky, a connoisseur of color, believed wholeheartedly in its spiritual properties: “The deeper the blue becomes, the more strongly it calls man towards the infinite, awakening in him a desire for the pure and, finally, for the supernatural.” He wasn’t alone in this sentiment. Eastern spiritualists have long associated deep blue gemstones, such as lapis lazuli, with the sixth chakra, or third eye, the seat of elevated consciousness in the human body. The Egyptian Book of the Dead recognizes lapis lazuli, carved in the shape of an eye and set in gold, as an amulet of inestimable power. Cleopatra, in common lore, wore powdered lapis lazuli as eye shadow.

Some colors assert themselves like unwelcome solicitors, or dinner guests with outspoken opinions, but ultramarine never impresses itself unduly on its viewer. It peddles neither sheer bliss nor utter despair. The art critic John Ruskin said, in a lecture delivered at the Philosophical Institution in Edinburgh, “The blue colour is everlastingly appointed by the Deity to be a source of delight; and whether seen perpetually over your head, or crystallised once in a thousand years into a single and incomparable stone, your acknowledgment of its beauty is equally natural, simple, and instantaneous.”

Ravi Mangla is the author of the novel Understudies. He lives in Rochester, New York.