[NFATW] How to Make a Zine for Dummies

In an increasingly digital world, it’s interesting to see how objects still play an important part in our lives. For 8 years now we’ve been claiming that “print is not dead”, far from it. At the time, people thought that we were crazy to launch a paper mag whilst everyone else was swearing solely by the internet. The times they have changed, and over the last few years a bunch of digital media have launched their own publications. What’s even more surprising is the rise of Fanzines that were, up until then, reserved to artists and a few alternative cultures. If you think about it though, what’s a zine? To get a better idea, we visited Adam Villacin in his L.A studio to look back at the origins of the Fanzine, its specificities and the place that this object holds in his artistic career.

Be Street: For the novices out there, can you tell us what a fanzine is?
A simple description of a zine would be a self-published book with a small circulation, most usually seen as an 8.5” x 5.5”, saddle stapled, photocopied, letter-sized-paper-folded-in-half-booklet. However, that’s a very broad definition for such a varied medium with such a rich history. The zine is the axis of many subcultures, both contemporary and antiquated.

B.S: When were the first fanzines released?
There are many different answers for this, going back to the dawn of the printing press. Thomas Paine made pamphlets that could be considered zines, as did Benjamin Franklin. There was a huge subculture of sci-fi zines in the first half of the 20th century. Ginsberg’s Howl was a zine. But to me, the most relevant answer is the fanzine rebirth in 70s, ushered in by punks in New York and London. 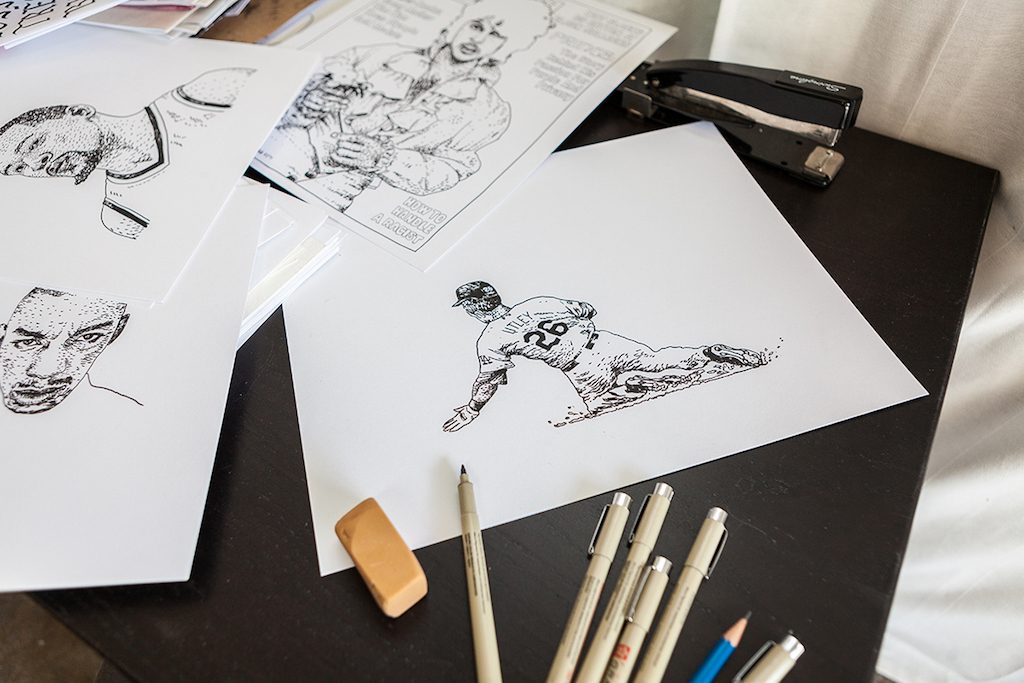 B.S: The fanzine is often assimilated to the Punk movement. Why is that the case?
The combination of punk DIY culture and the technological availability of cheap photocopies enabled a lot of these zines to be made. They both documented the culture and simultaneously informed it. Some great examples are Punk, Slash, Flipside, No Mag and Search and Destroy, which later became Re/Search.

B.S: Why did this medium play such an important role in your artistic career?
I think it has a lot to do with the function of zines. The point of a book is to spread information. The artist’s book is an art object whose form inherently carries with it that function. A zine is an inexpensive and available method of spreading my work. A lot of my work is clinical and encyclopedic in its categorization and tidiness, I think that the concept of a zine lends itself to my work.

Another aspect that I like about zines, which I think comes directly from the DIY part of punk culture, is imperfection. Making, say, 1000 copies of an object that takes this form, all by my own hand in my studio, will result in an imperfect edition. Sometimes my Risograph or copy machine will make a mistake, maybe there’s a spider on the glass, maybe I’ve made a typo- I often intentionally include them. I think they help remind the reader of the form.

B.S: You’ve created dozens of these now… what are the key steps in creating a zine?
My process usually begins by reading or observing a subculture. I find signifiers that interest me and work from there. I’m interested in finding patterns in human behavior, especially in tribal identity. Once I identify those, I try to expand on them, sharing observations with the reader. Generally, my work carries with it a dry and often morbid sense of humor.

Then you’ll need paper, a copy machine of some sort, and a long stapler.

B.S: In your opinion. What makes a fanzine a great fanzine?
Well, I value honest interest and authenticity above all else when I take in information. So if someone is making a zine about something they have a genuine interest in, whether they are a participant or an observer, those are both okay with me. As long as the author or artist is honest about their intentions. I think in the recent rise of zine culture, you can often find the same motifs repeating, the same signifiers, without an understanding. In that context, the signifiers lose meaning. No one can be a poseur is no one is concerned with authenticity.

B.S: Recently you released BOSS TRES BIEN, a 120 page fanzine printed in 4 colors with a Risograph printer… Why did you feel the need to go to a bigger scale compared to past creations?
It was really just an experiment to push myself to work on a larger scale. Like you said, I’ve made dozens and dozens of zines with practically the same format. I wanted to make less and more at the same time. The format of Boss Tres Bien is physically larger, but in essence, it’s 10 or 12 zines all rolled into one. It’s a collection of a body of work over a longer amount of time, rather than being collected more often.

B.S: When Nike asked us to think about an alternative collector’s item to celebrate AIR MAX DAY 2016, we immediately thought of you. How did you approach this project?
Quickly! Sneaker culture is something that is incredibly ubiquitous, especially so in my world, having grown up in Los Angeles with an interest in sports, hip hop, streetwear, etc. But I’ve never made any significant amount of work about it, even as an observer.

When it comes to a company like Nike, you immediately think of the history of the company. Not only have they been there the whole time, you could make a very valid argument that the culture wouldn’t exist, at least in the same way, without them. I was given access to promotional assets from the last thirty or so years, and started there, aesthetically.

I was interested in the idea of endorsements, signature shoes for athletes, brand ambassadors and all that. I’d say that a lot of my work centers on portraiture; individuals presented without background or context, to encourage the viewer to approach them in the same way. I wanted to include Nike athletes who are strong and recognizable figures in their respective games.

Once I had those elements, I filled in the dots with other visual elements that currently hold my interest. 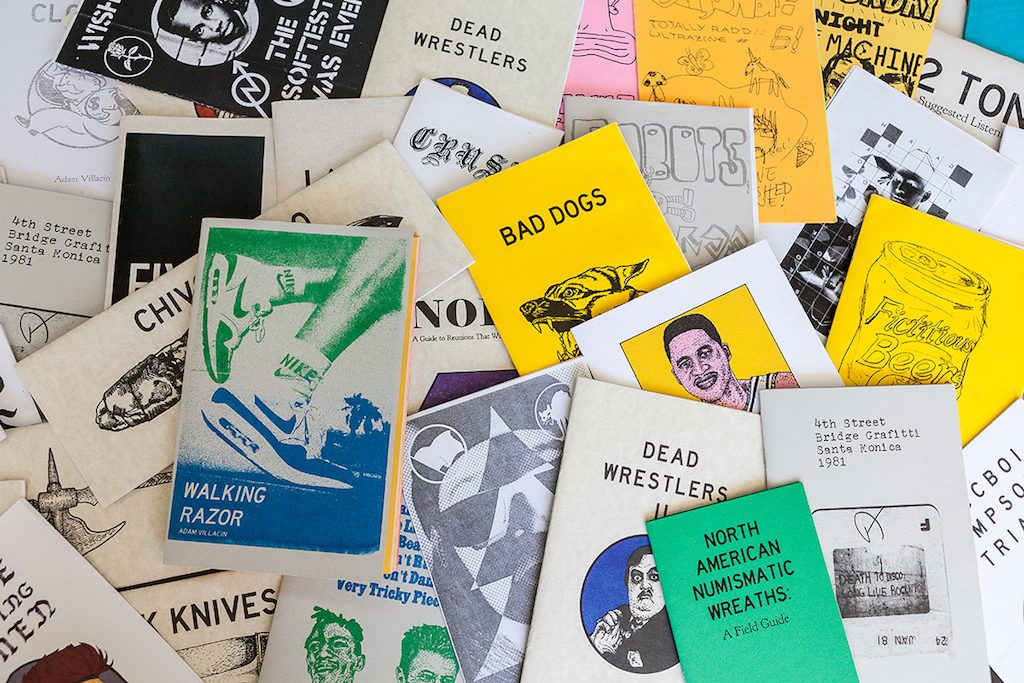 B.S: With a group of artist friends, you started the Drawing Party. Can you tell us more about this project?
Drawing parties started during my days at CalArts and have continued through the years. A while back, my friends Daniel Rehnberg, Sterling Bartlett and I started formalizing them a bit and added the element of making zines to the event. So now, at the end of the night, all the participants go home with a zine comprised of everyone’s drawings from the party, which we copy, collate and staple together. The zines are strictly limited to the attendees, and considering the incredible artists that come to the parties, they become pretty rare and desirable objects.

B.S: What’s your next fanzine project?
I don’t like to talk about projects until they are completed, but I have a few new books that I’m working on. The best way to keep up with what I’m doing right now is on my Instagram.

B.S: what’s your TOP 10 collector’s fanzines that any respectable collector should own?
Damn, that’s a really tough question, because there are probably hundreds of thousands, if not millions to choose from. Honestly, I can’t even attempt this because I’ll leave out something super important and look like a jerk. All the best ones are impossible to find, anyway. But if anyone has any old skinhead or D&D zines that they want to unload, please feel free to send them my way.

B.S: Thanks for everything, Adam. Anything else you’d like to add?
I guess I would like to encourage the curious to try to make a zine. It’s really quite easy and way more satisfying than a blog.