Artist Draws Detailed Portraits With Only His Eyes 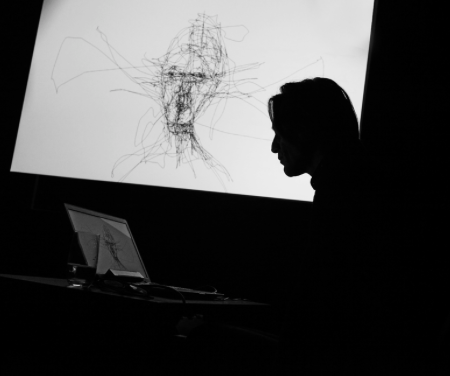 DRAWING IS A carefully choreographed dance between the brain, eyes, and hands. It requires the cooperation and coordination of the three to translate what’s seen in the mind to what’s drawn on paper. It doesn’t always quite work out. Things—namely, your hands—can get in the way of artistic vision. But what if they didn’t have to?

In the recent exhibition Drawing With My Eyes, artist Graham Fink drew portraits using only his eyes, some software and enviable amounts of concentration. Fink worked with a programmer to develop software for an eye-tracker that would allow him to draw simply by looking at the screen. Much like the EyeWriter, a piece of open-source software that lets disabled graffiti artists draw with their eyes, Fink’s setup is based on two infrared lights that shine into each eye. The reflection of this movement is recorded with a camera and passed through algorithms that slow the natural oscillation of Fink’s eye, turning what otherwise would be a shaky line into something much smoother.

All of the portraits are drawn with a continuous line, like an Etch-A-Sketch without a shake-to-erase feature. If you look closely, you’ll notice they begin with a line darting across the page, like an aura spiraling out from the body. This is the intentional result of Fink’s process. The artist doesn’t begin with a face in mind. Rather, he lets his eyes create a form subconsciously. “I find the face and bring it out,” he says.

It can take anywhere from five minutes to an hour to complete a portrait, depending on his level of concentration. The trick, Fink says, is to clear the mind as much as possible. Even with years of experience meditating, Fink quickly realized you can exercise only so much control over the brain. Beyond that, you must trust that your subconscious knows what it’s doing. Sure, the beautifully abstracted faces are to some degree the result of Fink’s imperfect control over his eye movement. But by eliminating the hands from the process, it’s also a uniquely pure form of expression.