A Guide To Coffee Culture At Sundance, 2015 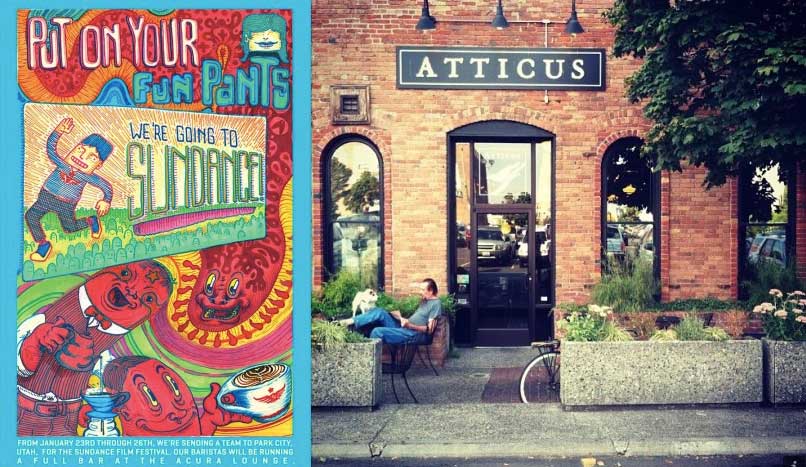 ONE | Actors Near Cars Getting Coffee

Join Intelligentsia at, Acura Lounge, named after the festival’s presenting sponsor .Feel the rev of specialty coffee and “complimentary fuel” courtesy with the brand’s pop-up bar. Boasting a “full pourover bar with Acaia scales and a La Marzocco 2 group Linea” they are ready for the pulling. | Serving Through Monday, January 26th.

Known for pairing genteel care and coffee in its cross-coast grooming spaces, Blind Barber has packed up for the weekend, leaving its Brooklyn outpost where coffee and style play main characters to give attendees some personal grooming of their own. Find them at WME Lounge in Park City with Peroni. Nice twist, right. | Through Sunday

The San Francisco based roasters has left its hills for the mountains of Park City. Taking temporary residence at Airbnb Haus, “a modern communal lodge designed to support and foster creativity, collaboration, and connection,” according to its mission, Four Barrel and its ‘Friendo Blendo Espresso’ makes a cameo alongside official AirBnb, an official sponsor of Sundance Fest. The ‘Haus’ becomes a true extension of coffee shop  culture providing a space for community through coffee talks, open-mics and special musical guest. I especially like the following ARTS:

StorySLAM with The Moth: A storytelling hour with two-time Emmy-nominated Brian Finkelstein and producer Sarah Austin Jenness of The Moth, an acclaimed non-profit organization dedicated to the art and craft of storytelling. The show will explore the theme of strangers, with audience members able to share their own relevant and personal stories, or just enjoy the unscripted and surprising show.

A visit to the Park City shouldn’t occur without a stroll through Atticus Coffee and Books.  A local, family  institution since 2010, for coffee and books, this coffee shop host special hours throughout the festival and will be home to what its calling the “Indie Fresh Brew Music Series.”  The series will host free performances in twelve hour – intervals daily. | 11 a.m. 11 p.m. Through February 2nd.

SIX | Trouble with Dot and Harry

What else could happen when two young siblings head out on a UK road trip with a family friend in search of coffee? The film, The Trouble with Dot and Harry viewing as part of Slamdance, explores this action, through two wide-eyed and acceptably curious –pre-adolescents by director Gary Walkow. | Premier January 24 @ 5:15, Tuesday January 27@ 11:20 a.m.

You want charm? If you’re here, you’ve surely found it in this 12-room boutique hotel, formerly a school house originally built in 1889. Now – architecture by Bennet and Associates and interior designs by Paul Allen Designs – its The Washington School House Hotel. A gram of these consciously coupled beds, united by French press and a tray of demitasse is all one needs to incite them for a stay here during the Festival and if no,t then, certainly post Sundance.

EIGHT | What is coffee and by goodness, what is a film without music? Courtesy of Power and Industry, also named IndieLounge, the five-year and counting escape from the main fare of Sundance presents a curated Koffeehouse. Featuring musical artists from country, rock, jazz to Nashville blues for intimacy – get cozy. | At Courtyard Summit through January 25th.